K-Net operates a computer network to which the dormitories on the DTU campus and in the Kgs. Lyngby area are connected.

The following dormitories are members of K-Net:

The K-Net association was started in 1996. The dormitories are members of the association. It is financed through the residents' rent. The association is managed by a board consisting of representatives from each member dormitory. The daily operations are handled by K-Net's operations groups (K-Net driftsudvalget). The work here is unpaid and voluntary. 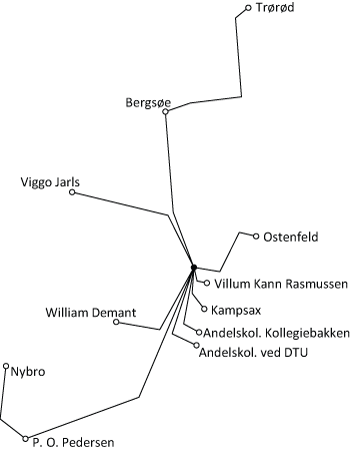 Approximate locations of the dormitories connected to K-Net

The scale of the distances to the farthest dormitories is reduced.

K-Net is connected to the internet through one of the larger internet providers in Denmark.

Should it appear that the residents of K-Net has abused other computer systems or networks, K-Net will ask the resident's network group to take action against the abuser. If no action is taken, K-Net will close resident's internet access. If a network group in general does not respond to requests from K-Net, the entire dormitory's connection to K-Net may be closed. This penalty is only a last resort. Clear communications with the network groups about abuse is very important, as K-Net is held account for the traffic it generates before DK-CERT and The Danish Research Network. If the abuse cannot be stopped, Forskningsnettet may be obliged to cut off the internet connection for all K-Net.

K-Net is an association (forening). The dormitories are members of the association. K-Net is managed by a board with one member and one substitute member from each of the member dormitories. Among these members, people for the following positions are elected: a chairman (formand), a vice chairman (næstformand) and a treasurer (kasserer).

Work on the board is voluntary and unpaid. Due to the high turnover rate of the people on the board only the current chairman will be listed here.

The Board can be contacted at bestyrelsen@k-net.dk

Would you like to be part of improving our exciting setup? Read more about volunteering.

K-Net was started as a collaboration between several dormitories, which is reflected in both the technical and the organisational structure. The purpose was and is to have a common "voice" towards the DTU and later The Danish e-Infrastructure Cooperation (DeIC).

The first initiatives to start K-Net was taken in October 1995. The possibility of an internet connection for the dormitories through UNI-C was discussed. In August 1996 DTU announced that they were interested in joining the project with financial support in the form of the necessary hardware. A month later Kampsax and Professor Ostenfeld were connected to DTU. Around the same time the first legal basis for K-Net were laid. From here K-Net developed quickly. DTU drew up a cooperation agreement and in following months several other dormitories joined (Paul Bergsøe, Villum Kann Rasmussen, Nybrogård, og P. O. Pedersen). In 1998 Viggo Jarls Kollegium joins. In 1999, Trørød Kollegiet joins. In 2002 William Demant Kollegiet, which had just been built, joins. After the construction of Andelskollegiet ved DTU in 2007, and Andelskollegiet Kollegiebakken in 2008, these were also joined K-Net.

One of the major points in original agreement between K-Net and DTU were that students at DTU should have access to DTU's systems and the internet. K-Net had to establish a separate internet connection for residents who were not students at DTU. In March 1997 an agreement with the former UNI-C (later Uni2) was established for a commercial connection to the Internet.

In the years after 1997 K-Net put effort into helping the dormitories establish fibre optic connections to K-Net.

In 2003, K-Net made an agreement with Jay.Net on an additional internet connection based on user fees. This was in 2005 supplemented with an agreement on similar terms with Bolig:net.

In autumn 2003 K-Net began a very focused effort to create an equally good internet experience regardless of the residents educational institution. During the summer of 2004 K-Net made an agreement directly with DeIC (Formerly The Danish Research Network). Today, all residents therefore have access to the internet on equal terms via DeIC.

If you are interested in the technical aspects of K-Net, see our technical setup.